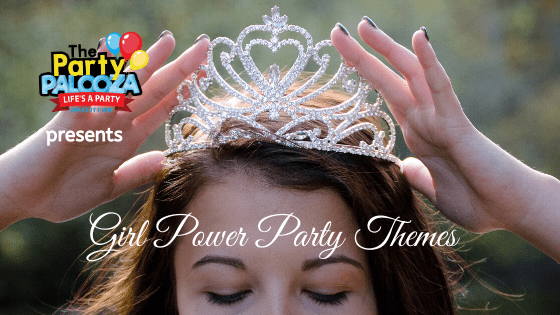 March is International Women’s Month, and what better way to commemorate your daughter’s birthday than with a Girl Power party? There are so many ways to celebrate female empowerment, even for young girls. Here, we’ve taken three of our favorite party themes for girls and injected them with inspiration from the most empowering role models from pop culture and current events. After all, girl power is all about ambition, so why not give your birthday girl a chance to shine?

Nothing says “girl power” quite like a superhero-themed party–but you don’t have to stick to the movies and comic books to fit the theme! Have guests invent their own superhero “costumes” by providing capes and masks to pose in for pictures. Add finger food (the better to eat with when you’re trying to save the world!) and balloons in comic-book costume colors, and you’ve got an inspiring party theme that encourages all kids to use their powers for good.

Does your birthday girl dream about making her own music? Break out the girl power-themed streaming playlist and throw her the ultimate pop star-themed party! Emphasize the inspiring party theme by decorating walls and cakes with song lyrics and quotes from female musicians. Unleash everyone’s inner celebrity with a photo booth for showing off their best angles. For added inspiration, add a special poster wall where family and friends can write and post empowering messages for your would-be musician.

Who said that princesses can’t be empowered? Turn this sweet party theme into an inspiring “girl-power” one by posting pictures of historical princesses around the world who became warriors and queens in their own right. Teach girls the value of taking care of themselves with a manicure station. For dessert, serve princess-inspired cakes with heartening messages for the princesses who want to rule.

The Party Palooza offers inspiring and empowering themed party packages for both girls and boys! For more information on how you can throw a mind-blowing party for your child, call (717) 751-1720 or email us at info@thepartypalooza.com.